Finalist for the Giller Prize, and long listed for the Sir Walter Scott Prize for historical fiction.

It begins with a chance encounter at the top of the world.

Fay Morgan and Nelson Nilsson have each arrived in Inuvik, Canada – 120 miles north of the Arctic Circle – searching for answers about a family member: Nelson for his estranged older brother, Fay for her disappeared grandfather. They soon learn that these two men have an unexpected link – a hidden share in one of the greatest enduring mysteries of polar exploration.

This is the riddle of the ‘Arnold 294’ chronometer, which reappeared in Britain over a hundred years after it was recorded as lost in the Arctic with the ships and men of Sir John Franklin’s Northwest Passage expedition. The secret history of this elusive timepiece, Fay and Nelson will discover, ties them and their families to a journey that echoes across two centuries.

In a feat of extraordinary scope and ambition, Ed O’Loughlin moves between a frozen present and an ever-thawing past, and from the minds of two present-day wanderers to the lives of some of polar history’s most enigmatic figures. Minds of Winter is a novel about ice and time and their ability to preserve or destroy, of mortality and loss and our dreams of transcending them.

Minds of Winter is published by Riverrun Fiction.

Praise for Minds of Winter 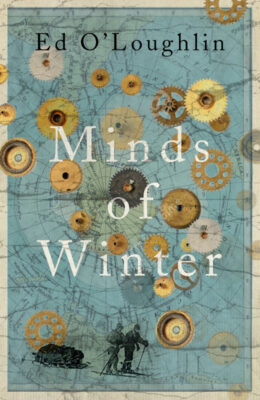 The Sunday Times
In from the cold: A tale of polar expedition turns out to be unexpectedly heart-warming
“In both concept and execution the novel is a serious piece of work at once vastly entertaining and ambitious on a scale that leaves much of contemporary Irish fiction looking woefully insubstantial….there will be few better historical novels published this year.”

The Irish Times
A novel wondrous in tone and reach
“Minds of Winter is a big, complex book. Multiple stories are told in different voices and in different eras. Research is gathered and sifted. The voyages of the lost are without end and do not lend themselves to straightforward narrative. The pack-ice shifts above unknowable depths. O’Loughlin has worked the essential harmonics and set the whole structure echoing. The final pages seem inevitable, as great endings must; the whole novel wondrous in its tone and reach. The title is from Wallace Stevens’s poem The Snow Man, where we’re asked to behold “Nothing that is not there and the nothing that is”. It takes a good writer to take that on. It takes a great one to succeed.”

The Sunday Business Post
Reimagining the fate of a doomed Arctic expedition
“With each novel, O’Loughlin is expanding his interests and his imaginative grasp – the first sign of a genuinely talented writer. He is rapidly becoming one of the most interesting novelists currently at work.”

The Australian
Ed O’Loughlin’s Minds of Winter: polar exploration’s allure examined
“The writing is stupendously good, crisply lyrical without ever becoming absorbed by its own density. In his description, O’Loughlin stretches the imagination in terms of both the scenery and the words that describe it.”

The Arctic Book Review
“Ed O’Loughlin’s Minds of Winter … may well be the Franklin novel to end all Franklin novels. Never have so many different narrative threads been taken up and twined together.. It would seem a daunting task to connect so many historical figures in a single volume, something like trapping demons in a cursed box, but the talisman that O’Loughlin employs is deceptively modest: a single marine chronometer, Arnold 294, which showed up intact at a 2009 auction in the UK when it was supposed to have been issued to Franklin’s ships 164 years previously.”

“Ed O’Loughlin’s Minds of Winter embarks on an expedition into some of the enduring mysteries of polar exploration. A contemporary framing narrative sees two wanderers, Fay Morgan and Nelson Nilsson, meet in the frozen wilds of Canada, at remote Inuvik, well within the Arctic Circle. Each has a connection to enigmas of the ice, and the novel opens out into a slew of historical figures: Sir John Franklin, whose 1845 voyage to traverse the Northwest Passage ended in the loss of all hands (some likely to cannibalism); his tenacious wife, determined to discover his fate; Roald Amundsen, whose plane vanished in 1928 on a rescue mission; even “The Mad Trapper of Rat River”, a Canadian fugitive who prompted a large-scale polar manhunt. Easy for the reader to get lost in the author’s narrative labyrinth, but that’s part of this grand and ambitious book’s pleasure, too.”

The Sunday Independent
Polar epic sings with intrigue and beauty

“Time, geography, motivations and truths – this is the basic periodic table of elements to those reporting from overseas. Should it be any surprise then that Minds of Winter (his third novel proper after the Booker-longlisted Not Untrue & Not Unkind, and Toploader), should soar so confidently, whisking the reader as it does around the world and through a few centuries in pursuit of an echoing tale of the ages?”

In from the cold: A tale of polar exploration turns out to be unexpectedly heart-warming
The Sunday Times Culture Magazine, 14th August 2016

A novel wondrous in tone and reach
Reviewed by Eoin MacNamee, The Irish Times, 27th August 2016