The Last Good Funeral of the Year

Finalist for the Giller Prize, and long listed for the Sir Walter Scott Prize for historical fiction.

It was February 2020 when Ed O’Loughlin unexpectedly heard that Charlotte, a friend from the old days, had just died young and before her time. He realised that he was being led to reappraise his life, his family and his career as a foreign correspondent and novelist in a new, colder light.

This search for meaning becomes the driving theme of O’Loughlin’s year of confinement. The result is a haunting examination of the author’s early life and love, the journalists and photographers with whom he covered wars in Africa and the Middle East, the suicide of his brother, his new work as an author, a family home on the edge of a graveyard, and the mysteries of memory, ageing and loss.

He was suddenly faced with facts that he had been ignoring, that he was getting old, that he wasn’t what he used to be, that his imagination, always over-active, had at some point reversed its direction, switching production from dreams to regrets.

Moving, funny, and searingly honest, The Last Good Funeral of the Year takes the reader on a circular journey from present to past and back to the present: ‘Could any true story end any other way?’

The Last Good Funeral of the Year is published by Riverrun Fiction. 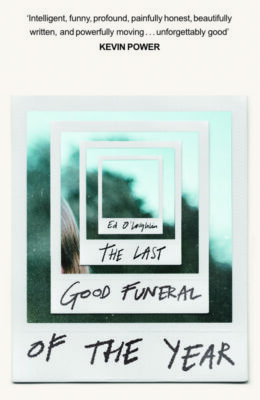 Praise for The Last Good Funeral of the Year

A “beautiful and curious memoir … unflinching in the face of tragedy – but, more than that, it is a robust examination of memory in its most ineffable form.

There are so many good things here you get the feeling that he has negotiated his way past the rocks of his own reluctance about writing about himself and can’t really believe that he’s managed it.

… an absorbing, meditative text, equally affectionate and unflinching, engaging head on with the pain of saying farewell to youth and accepting mortality … a moving testament to the paths that lost loved ones, however briefly they were known, can still lead us on …

Deftly and with increasing assurance, O’Loughlin weaves the tapestry of a life, pulling at the threads and dropped stitches of experience that have brought him to this difficult time and place … a soul-baring account of love in the time of cholera.

Ed O’Loughlin has given us a powerful and unusual memoir. At times heartbreaking and often laugh-aloud funny, The Last Good Funeral is set to be among the very best of books for 2022.

The Last Good Funeral of the Year is intelligent, funny, profound, painfully honest, beautifully written, and powerfully moving. Ed O’Loughlin is a writer who does brilliantly everything he turns his hand to; it’s no surprise to find that his memoir is so unforgettably good.