Spying inside the Embargoed Zone is an expensive business, not to say risky, and Agent Cobra wants his wages in full. But his down-at-heel spymaster can only offer payment in kind – and the first thing he finds in an unattended storeroom. And so both men are sucked into the mysterious Toploader project, a race to retrieve a deadly secret from inside the world’s first – and best – walled-off terrorist entity.

Also caught in the crossfire are a resourceful teenage girl, a gung-ho reporter, a hapless drone-pilot and at least one very unfortunate donkey.

Toploader is about to make their lives a lot more dangerous, and an awful lot more bizarre.

The Guardian
‘It is not altogether extravagant to claim, as the book’s publicity does, that Toploader is “in the tradition of M*A*S*H, Catch 22 and Slaughterhouse-Five”, but there is no real need for such comparisons: situated, or rather wavering nicely, somewhere between satire, fable and shaggy dog story, O’Loughlin’s second novel (his first was longlisted for the Man Booker) should be enjoyed for its own virtues, the most unsettling of which may be its extreme laconicism. One absurdist delight follows another in rapid succession…’

Times Literary Supplement
‘O’Loughlin, who spent years working as an international correspondent in Africa and the Middle East, has made use of his experiences to create an intelligent world informed by contemporary conflicts… At times, the satire is reminiscent of Joseph Heller or Thomas Pynchon in the way it embraces the sheer stupidity of the situations it describes, but unlike those authors, O’Loughlin adds eloquent and thoughtful political discussions, which do not disrupt his fast-paced narrative.’ 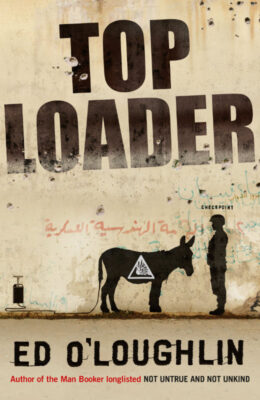 Book of the Week, SPORT Magazine, London
‘A spy called Agent Cobra, a deadly secret and an exploding donkey isn’t what you’d expect from a Booker Prize long-listed author, but it’s what you get from Ed O’Loughlin’s latest. Toploader (out Monday) is a darkly comic war novel with hints of Catch 22 and no mention of those Dancing in the Moonlight bellwhiffs.’

Flint Driscoll, www.blow-back.net
‘A powerful… book, set in a fantasy world of the author’s prodigiously… inventive imagination… This is the most… funny book I have ever read… Simply quite stunning.’

The Big Issue (UK)
‘A biting military satire set in a near-future world in the vein of Catch 22, this is quirky and clever. O’Loughlin’s storytelling and sense of the ridiculous are acute, examining modern terrorism and conflict with an unflinching eye.’

Siobhan Murphy, Metro (UK)
‘Booker-longlisted author Ed O’Loughlin follows up Not Untrue and Not Unkind by plunging us into a stinging satire on the War on Terror that mines the same vein of macabre humour. The residents of the Embargoed Zone are all deemed ‘terrorists’: a wall surrounds their shattered territory; they are under permanent surveillance and regularly bombed and shot at; amenities are cut off and supplies deliberately held back ‘for security reasons’. The grinding misery of life in these circumstances is vividly rendered and often wrenchingly sad. This is the setting for a ‘madness-of-war’ farce that starts with an exploding donkey and picks up speed with characters of Carl Hiassen-like grotesquerie and a peripatetic, weapons-grade top-loading washing machine. O’Loughlin expertly manipulates the interlocking cock-ups and misunderstandings powering his plot. He can do funny as well as poignant and although at times he tips too far into silly, he still nails a caustic attack on the fallout of innocent victims from increasingly arrogant counterterrorism measure.’

Press Association
‘Enter the Embargoed Zone and you could end up getting as lost as Ed O’Loughlin’s myriad of characters as they dodge one another as well as bullets and other more deadly projectiles. Toronto-born and Ireland raised, O’Loughlin’s dark take on life inside an occupied city is the follow-up to the highly acclaimed Not Untrue and Not Unkind. Follow Flora, the hard-as-nails yet vulnerable star of the show, keeping in the shadows as she skirts her way around the terrorists and the army of occupation in a vain attempt to find a way to freedom. Throw into the mix a top secret Toploader washing machine and you have all the ingredients for a fast-paced and fun fiction, which will also prick at your conscience as you sit reading in a comfortable armchair, divorced from a life that for some is much more real than this novel. Although this is only O’Loughlin’s second novel, it surely won’t be his last.’